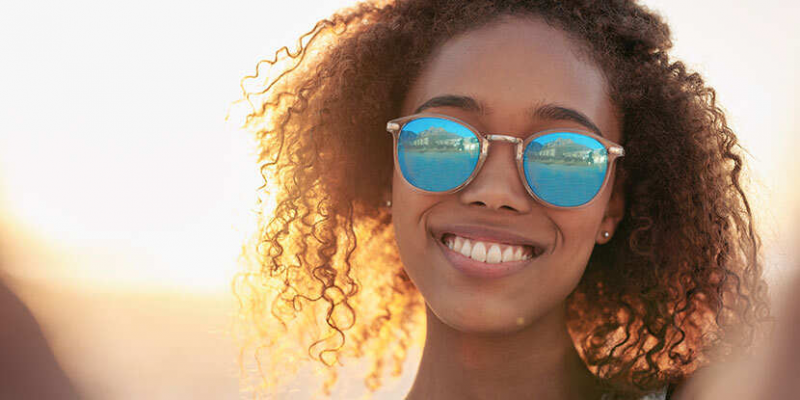 Written By: Shirley Dang for the American Academy of Ophthalmology on June 11, 2021

Everyone’s eyes are susceptible to damage from ultraviolet (UV) light, regardless of age or skin pigmentation. But some people are at higher risk. Children have a high risk of sun damage as they play outside, for example. And some studies show that people with certain eye diseases such as retinal dystrophy may also be at higher risk for sun damage.

Here are some other situations that increase your sensitivity to UV light.

People who had cataract surgery years ago may have an elevated risk of UV damage. During this surgery, the eye’s lens is removed, leaving the eye more vulnerable to UV light. The natural lens is usually replaced by an intraocular lens (IOL). Older intraocular lenses absorb much less UV light than ordinary glass or plastic eyeglass lenses. Manufacturers of IOLs now make most of their products UV-absorbent.

During cataract surgery, an IOL (shown above) replaces the eye’s natural lens.

If you have an eye condition such as age-related macular degeneration (AMD) and recently received photodynamic therapy, your ophthalmologist may advise you to avoid sun exposure for a few days after treatment. During this time, be sure to wear dark sunglasses and protective clothing whenever you go outdoors. Ask your ophthalmologist how long you should continue take these precautions.

Photosensitizing drugs — drugs that make your skin more sensitive to light — can make your eyes more sensitive to light as well. You should discuss precautions with your ophthalmologist if you are taking photosensitizing drugs and wear UV-absorbent sunglasses and a hat whenever you go outside for as long as you take them. Some of the drugs that may increase your risk of UV sensitivity include:

Anti-inflammatory pain relievers like ibuprofen and naproxen sodium have also been shown to cause photosensitivity, though the reaction is rare.

Light-Colored Eyes Are at Higher Risk of UV Damage

Have blue or green eyes? Cover up with a hat and glasses to protect your vision. Some studies show that UV exposure and light irises may increase the risk of rare eye cancers, such as melanoma of the iris or uveal melanoma.

However, not everyone knows about the connection. According to an eye sun safety Harris Poll by the American Academy of Ophthalmology, 54% of people in the United States reported having light colored eyes (blue, green or hazel), but less than a third of them knew that light-colored eyes are associated with greater risk of certain eye diseases.