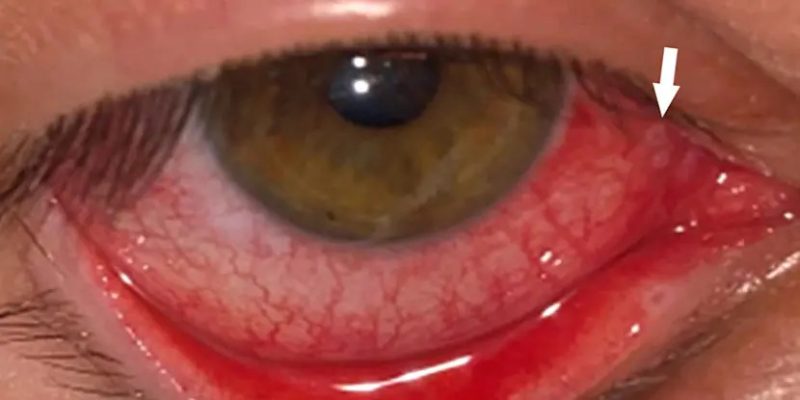 By Anni Delfaro Aug. 26, 2022 for the American Academy of Ophthalmology

Monkeypox cases swept the globe in 2022, spilling out of historically endemic areas in West and Central Africa. By July, cases had been confirmed on every continent except Antarctica and the World Health Organization declared the outbreak a Public Health Emergency of International Concern.

Past reports warn that monkeypox may cause eye problems ranging from pink eye (conjunctivitis) to vision loss from corneal scarring. But how common are these complications and what should patients watch for?

Ophthalmologists offer advice on monkeypox eye symptoms, home remedies and when to call a doctor.

Monkeypox is a virus that is closely related to smallpox, but far less deadly and contagious.

This virus is not new. Monkeypox was first identified in 1958 in monkeys transported to Denmark for scientific research, but scientists suspect it’s been circulating for thousands of years. Interestingly, it has only once been identified in a wild monkey; it’s far more common in rodents.

The first human case of monkeypox was reported in 1970 and, until now, most human cases have occurred in West and Central Africa.

Most people with monkeypox develop symptoms 1 to 3 weeks after close contact with an infected person. In general, these may include:

If you develop these symptoms, ask your doctor about testing and treatment for the virus.

“While the monkeypox rash can have a characteristic appearance, it shares some similarities with other infections such as syphilis, herpes simplex and varicella zoster virus (the cause of shingles and chickenpox) and may require additional lab testing,” says Steven Yeh, MD, an ophthalmologist and expert in ocular infectious disease.

How does monkeypox get into the eyes?

It’s very common for people with monkeypox to develop a rash on the face. This increases the risk of eye problems.

“Watch for lesions around the skin of the eye,” advises Dr. Yeh, whose clinic cares for patients referred from the United States as well as several countries in sub-Saharan Africa, including Sierra Leone and the Democratic Republic of Congo.

Avoid touching your face or rubbing your eyes – especially if you have blisters on or near your eyelids. Doing so can increase your risk of pink eye (conjunctivitis) or other monkeypox-related eye problems.

Monkeypox can cause pink eye, or conjunctivitis

Most of what we know about monkeypox-related eye problems comes from studies of past outbreaks in Africa. Those reports warned that as many as 30% of people with monkeypox experience pink eye, or conjunctivitis.

But pink eye has been far less common in the 2022 outbreak. A recent study of 528 people infected with monkeypox between May and June 2022 found that only 3 developed conjunctivitis.

It’s possible that symptoms may differ – or new ones may emerge – during the current outbreak, since it has expanded to new places and populations. “We are seeing a spectrum of disease that was not reported or detailed in prior outbreaks,” says Dr. Yeh.

So far, people infected during the 2022 monkeypox outbreak have developed eye problems such as:

Infected people who have been vaccinated against smallpox or monkeypox have a relatively low risk of developing these eye problems.

Can monkeypox cause blindness?

“While monkeypox cases are rising rapidly in the city, serious ocular manifestations are thankfully very rare,” says Dr. Starr. He and his colleagues have treated several patients with monkeypox, but so far none have developed problems in the eyes.

Ophthalmologists in the San Francisco Bay Area, another monkeypox hot spot, agree that eye complications have been rare in the current outbreak. “I have yet not heard about or seen any cases of moneypox-associated conjunctivitis,” says ophthalmologist and Academy member Jessica Shantha, MD, who treats patients at the University of California at San Francisco.

According to a new entry in the Academy’s EyeWiki, serious eye complications can include an infection of the cornea that could lead to vision loss. Most reports of vision-threatening eye complications occurred during previous outbreaks in Africa.

“My sense is that ocular manifestations are not common, and when present are generally mild and not sight threatening,” Dr. Starr says. “While permanent blindness has been reported, this is an extremely rare complication.”

Should you treat monkeypox-related pink eye and other eye symptoms at home?

If you develop eye pain or decreased vision, contact an ophthalmologist as soon as possible. The FDA has not approved any eye medications specific to monkeypox, but doctors may use antiviral medications, antibiotics or anti-inflammatory drugs to treat serious eye problems.

If you have mild eye symptoms without pain or blurred vision, try these home remedies:

Preventing the spread of monkeypox

If you develop symptoms of monkeypox, isolate at home until your rash has completely healed.

If you are caring for someone with monkeypox, be sure to wear gloves and a properly fitting mask. Avoid skin-to-skin contact.