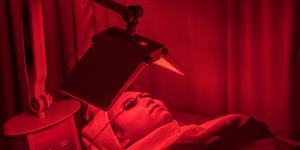 Written By: Reena Mukamal for the American Academy of Ophthalmology.

Red light therapy is used to calm acne, heal wounds and reduce arthritis. Now, new findings suggest red light may also protect our eyes as we age. But eye experts warn that the practice has not been well studied in humans — so don’t try this at home.

Exposure to red light may recharge cells in the retina

A study in The Journals of Gerontology found that brief exposure to deep red light — three minutes a day for two weeks — improved older adults’ ability to discern letters against a similarly colored background.

This ability, called color contrast sensitivity, is the work of cone cells in the retina. Cone cells discriminate colors less well as we age. The findings raise the possibility of reinvigorating aged retinal cells by exposing them to beams of long-wavelength (670 nm) red light.

How does this work? Some scientists think red light recharges the cell’s powerhouse or “battery,” known as the mitochondria. As we age, mitochondria produce less energy. Deep red light may restore energy production to youthful levels, studies suggest.

It’s unclear if the new findings will hold up in a large human clinical trial, or whether red light is any more protective than a “dummy light” or a placebo. It’s possible that participants improved their performance on the color contrast test due to the learning effect (that is, by becoming experienced test takers) and not necessarily due to the red light treatment.

But this isn’t the first study to hint at red light’s protective effects on the retina. Most research has been done in animals and in cells grown in the laboratory. A 2017 study found that red light partially reversed the effects of aging in the retinas of old mice, enhancing retinal performance by 25%. And a 2019 study found that while blue light damaged lab-grown retinal cells, red light reversed that damage.

Deep red light is not an approved eye treatment

“Based on research so far, there is some evidence that light therapy has the potential to improve eye health,” says Ninel Z. Gregori, MD, an ophthalmologist at the Bascom Palmer Eye Institute in Miami. “But we need a lot more data in humans before it can be used to treat ocular disease or aging eyes.”

Before red light can be considered as a possible treatment for eye conditions, it must be tested in human clinical trials to make sure it is safe and to determine the most effective wavelength, dose, duration of treatment and delivery method.

If the findings hold up in humans, red light therapy may someday hold promise for treating age-related conditions such as macular degeneration, diabetic eye disease or loss of color vision.