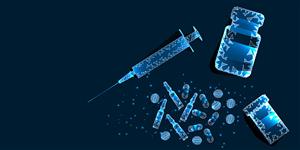 Written By: Reena Mukamal …for the American Academy of Ophthalmology.

There are no treatments for the most common form of age-related macular degeneration, known as dry AMD. But that may soon change, experts say. Here are some of the most exciting treatments on the horizon for the wet and dry forms of the disease.

Wet AMD develops when new, abnormal blood vessels grow under the retina. These vessels may leak blood or other fluids, causing scarring of the macula. You lose vision faster with wet AMD than with dry AMD.

“Twenty years ago, wet AMD was a death sentence for your vision,” says Jayanth Sridhar, MD, an assistant professor of clinical ophthalmology at the University of Miami Miller School of Medicine.

Then, in 2005, anti-VEGF drugs broke ground by saving the sight of patients with wet AMD. These drugs stabilize or improve vision in the vast majority of patients. But they must be injected into the eye on a regular basis.

“Today, more durable therapies are coming out, and treatments that may even cure the disease are in the works. There’s a lot of hope for people with AMD,” Sridhar says.

Gene therapy is a promising alternative to ongoing eye injections of drugs such as Eyelea, Lucentis and Avastin. The goal of gene therapy is to provide a ‘one-and-done’ treatment by helping the eye make its own anti-VEGF medicine. This is done by inserting a harmless virus carrying the anti-VEGF gene into a patient’s own DNA. Scientists are testing two different approaches. The first therapy, RGX-314, requires a single injection under the retina. This is performed in an operating room. This therapy is about to enter phase two-b clinical trials. The second treatment, ADVM-022, can be injected into the eye in the doctor’s office. ADVM-022 is moving into phase two clinical trials. Both therapies could be available to the public in as few as three years.

The port delivery system (PDS) is a tiny refillable device that stores anti-VEGF medicine. No bigger than a grain of rice, the port is implanted into the wall of the eye during a surgical procedure. The PDS continuously releases anti-VEGF medicine into the eye. It can free patients from re-treatment for up to two years. Refills can be done during an office visit. The PDS is moving into phase three clinical trials, and may be on the market within three years.

An eyedrop for AMD has been tested in animal trials. If approved, this drop could eventually become the first at-home treatment for AMD. But before that happens, the anti-VEGF drop must undergo testing in human clinical trials. This non-invasive treatment may take 10 years or longer to hit the market.

A pill-form of anti-VEGF medicine has entered phase two clinical trials. Early studies suggest the drug may eliminate or reduce the need for eye injections. But developers are still trying to eliminate the unwanted effects of this medicine. Side effects include leg cramps, nausea and changes to the liver. Experts say the anti-VEGF pill is at least five years away from consumer availability.

Drugmakers are creating new anti-VEGF treatments that do not need to be injected into the eye as often as Eyelea, Lucentis or Avastin.

Novartis’ new drug, Beovu, is now approved for use in the United States. About one in every three patients using Beovu can go for as long as three months before needing another injection. Beovu may do a better job than other drugs of drying retinal fluid in patients with wet AMD.

Allergan’s Abicipar is still in phase 3 clinical trials and has not yet gained FDA approval. Studies suggest this drug allows patients to go three months between injections. This drug is also being evaluated for macular edema.

Another injectable medicine — Sunitinib by Graybug Vision — has the potential to give patients 6 months of durability between treatments. Sunitinab is just entering Phase 2B clinical trials. It may still be 3 to 5 years away from becoming available.

Radiation therapy may slow the growth of blood vessels in wet AMD the same way it destroys fast-growing cancer cells. Scientists still do not know if this treatment is safe to use for long periods of time. Two types of radiation therapy are being tested outside of the U.S. Oraya Therapeutics’ IRay Radiotherapy System is available in the UK and Switzerland, and will soon be tested in the U.S.. Salutaris Medical Devices, Inc. has a license to treat wet AMD with an investigational device in the US. The company is also working with an eye hospital in London, where they plan to begin clinical trials within the year.

About 8 out of 10 of people with AMD have the dry form. In its advanced stages, dry AMD is known as geographic atrophy (GA). Dry AMD occurs when parts of the macula thin with age, and tiny clumps of protein called drusen grow. You slowly lose central vision. There is currently no way to treat dry AMD. But several promising treatments are in clinical trials.

Stem cells may be able to replace the retinal cells that are killed off by this disease. Doctors are devising ways to transplant these stem cells into the eye. One strategy is to layer the stem cells on thin scaffolds. Another tactic is to put the cells into a fluid suspension that can be injected under the retina. Though stem cells have only been tested in small clinical trials so far, they show promise. It may take about 10 to 15 years for these therapies to be fine-tuned and proven safe and effective in humans.

Apl-2 is an injected drug that slows disease by saving retinal cells from destruction. The treatment is in phase three clinical trials and is still 3 to 5 years away from consumer availability.

Zimura is another treatment that must be injected into the eye. In a phase two-b clinical trial, Zimura slowed the progression of GA. Manufacturer Iveric is preparing the drug for a phase three study.

Oracea, an oral antibiotic known as doxycycline, is being tested as a treatment for dry AMD. It has anti-inflammatory properties that may be beneficial for patients with GA. The drug is in phase three trials, and may be on the market as early as 2021. Some patients in earlier studies experienced side effects. These include rashes, sensitivity to sunlight and stomach upset.

A popular diabetes treatment, metformin, is also being tested for dry AMD. In one long-term study, patients who took the drug were less likely than others to develop AMD. Scientists believe this may be due to the drug’s anti-inflammatory properties. A phase two clinical trial is currently underway.