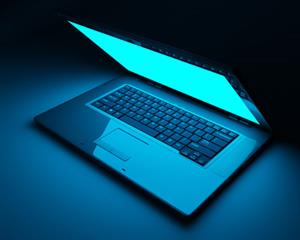 Courtesy of the American Academy of Ophthalmology

When you stare at a screen for hours at a time, whether it is a computer, TV, phone or tablet, you are exposed to blue light from the device. But there is no scientific evidence that blue light from digital devices causes damage to your eye.

The discomfort some people have after looking at screens is most likely digital eye strain. Most of us blink less when looking at screens, causing eye strain and dry eyes, says Rahul Khurana, MD, a spokesperson for the American Academy of Ophthalmology.

Blue light does affect the body’s circadian rhythm, our natural wake and sleep cycle. During the day, blue light wakes us up and stimulates us. But too much blue light exposure late at night from your phone, tablet or computer can make it harder to get to sleep.

That is why Dr. Khurana recommends that you try to limit your screen time in the two to three hours before you go to bed. Many devices have nighttime settings that minimize blue light exposure in the evenings.

Too much exposure to ultraviolet light from the sun increases the risks of eye diseases, including cataracts, growths on the eye and cancer. We know less about blue light. Its effects are still being researched.

The bottom line, Dr. Khurana says, is that taking preventive measures against blue light even though there is no evidence of damage could be more harmful than the blue light itself. “It’s premature to take preventative action against blue light—there could be unintended consequences,” he says.

Some studies suggest that not enough exposure to sunlight in children could affect the growth and development of their vision. Not getting enough sun could also increase the risk of myopia (nearsightedness) in teens and young adults, a recent study suggests.

The best way to protect your eyes against eye strain from blue light in devices is to take regular breaks using the “20-20-20” rule: Every 20 minutes, shift your eyes to look at an object at least 20 feet away for at least 20 seconds. You can also use artificial tears to refresh your eyes when they feel dry. Skip the glasses that claim to protect your eyes against blue light, because of a lack of evidence they are effective, Dr. Khurana advises. The Academy does not recommend any special eyewear for computer use.